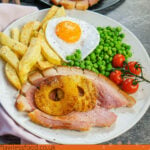 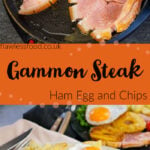 Gammon Egg and Chips is a fantastic British pub food meal to make at home, we show you how to cook gammon steak - ham egg and chips as it is otherwise known!

Gammon egg and chips topped with pineapple and served with tomatoes and peas, makes a great filling hardy meal.

How to cook gammon steaks - ham egg and chips?

Cooking gammon in a pan is easy and quick. We will give you all the info you need, from how long to cook and what to serve with gammon steak in the below recipe card

You can also check out our slideshow video below or continue reading for more tips on cooking gammon eggs and chips.

What is gammon steak?

Gammon steak is cut from the hind leg of pork, usually cured and often smoked, sold uncooked. They are often sold in a double pack ready to cook at home.

You could also slice your own slices from a whole gammon joint.

Difference between gammon and bacon?

Gammon is similar to bacon, but cut from a different part of the pig and also cut a lot thicker!

Difference between gammon and ham?

Unlike ham, gammon steak has to be cooked before serving. You can still use thick slices of ham instead to make ham egg and chips.

The easy and quick way to cook gammon steaks is in a pan.

How to stop gammon curling?

First tip before cooking gammon steak is to cut small incisions into the rind and fat layer, this will prevent the gammon from curling whilst cooking, so it will cook evenly on both sides.

Now you can cook gammon steaks in a frying pan.

How long to cook gammon steaks?

Gammon steaks typically take between 3-6 minutes on each side (depending on the steak thickness).

As mentioned earlier, you can use large thick slices of smoked ham instead of gammon, especially if you are from the US where gammon is not widely available. Feel free to warm up the slices in a pan or simply serve cold!

What to cook with Gammon or Ham?

Gammon egg and chips also great served with pineapple, tomatoes and peas on the side.

We like to make our homemade air fryer chips as seen in pictures on this post, but you can buy frozen chips if preferred? Just make sure to cook them first as they take the longest time!

Whilst the gammon and chips are cooking fry some pineapple rings and tomatoes. Sprinkle the pineapple with brown sugar and coat the tomatoes with oil.

Cook pineapple until browned on both sides.

We like to use duck eggs for our gammon egg and chips recipe, they are bigger than chicken eggs and the large runny yolk acts as a great creamy dip for the gammon and chips.

Lastly, cook some peas to add a bit of nutrition to this hardy meal.

How to serve gammon egg and chips?

Serve gammon egg and chips with pineapple tomatoes and peas for a fantastic British dish to enjoy.

Salt and pepper and we also added a good dash of our homemade chilli vinegar. Absolutely delicious! 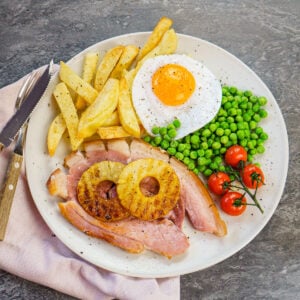 We hope you enjoy this Gammon steak recipe as much as we do?

If you enjoy ham egg and chips be sure to check out our other British dishes, such as pie mash and liquor or steak and ale pie.