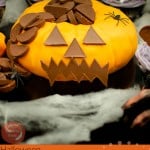 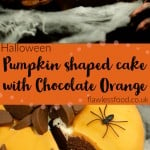 Our Terry's Chocolate Orange Pumpkin Shaped Cake is a showstopping centrepiece treat for any Halloween party.

Step by step guide showing you how to make a Chocolate cake cooked in a large doughnut cake mould, to form a rounded shape.

With a Terry's Chocolate Orange added in the middle before being decorated into a pumpkin.

Decorated with orange icing, chocolate shaped for eyes, mouth and stalk and finally a fountain of terry chocolate mini's coming out the top of the pumpkin.

Halloween is just around the corner so time for Kay to dust of her broomstick, we have pulled the cauldron out and decided to treat the kids this time.

In this case, we called in the help of my ever so creative sister Rebecca. Not only does she love to make cakes, but also is brilliant at it.

She should be doing it professionally; a wasted talent!

How to make a Halloween Pumpkin Shaped Cake at home?

Check out the step by step slideshow video to see what is involved in making this cake.

Scroll down to the recipe for full ingredients and how-to, or carry on reading below for more advice.

We have broken this post into 2 separate recipe cards.

One for the chocolate cake and the other for the decoration steps.

If you wanted you could just buy a ready-made chocolate sponge cake to give you a head start and jump straight to the decoration?

We used a large doughnut cake ring to give us a rounded pumpkin shape chocolate sponge ready to be decorated. The best part about it is the Terry's Chocolate Orange slots in perfectly!

How to make a simple homemade chocolate sponge mix?

Pour this mixture into the 2 large doughnut ring cake moulds, bake in oven until risen and springy to touch.

Leave to cool before turning out the cake.

Equipment that helped us make a pumpkin shape cake.

Can I use store bought cake instead?

If you opted to get a store-bought chocolate sponge cake, you just saved yourself 45 minutes! You may need to buy 2 simple sponge cakes.

Carve some cake away to make it more rounded and add a hole in the middle, big enough to put the Terry's Chocolate Orange inside!

Make a cone shape with the parchment paper to pour the other half in for the stalk. We didn't get the photo for this but you can see how to make a cone on this youtube tutorial.

Refrigerate whilst you work on the rest of the cake.

How to make a easy butter icing?

Simply whisk the butter in a mixer (or hand mixer) until softened then add icing sugar and finally vanilla extract continue mixing until light and creamy.

Use this icing to build up the cake. First add the Terry Chocolate Orange in the middle of the bottom layer, then icing, then next cake layer.

Followed by a coating all over of butter icing.

How to create orange fondant icing for Pumpkin Shaped Cake?

Simply buy some ready made white fondant and some orange food colouring strong gel. Knead the fondant to soften and keep adding orange gel until the right colour.

Sprinkle icing sugar down and roll out using a rolling pin, until bigger than the sponge.

Transfer rolled fondant onto the cake, cut away the excess icing (saving for later).

Use a fondant smoothing tool to smooth out any lumps or air pockets. Cut out a star shape from the top and remove fondant.

Now add Terry's chocolate orange mini's into the hole, use the leftover butter icing to glue the mini's down the side of the pumpkin.

Use a ball tool to add some contour lines up your pumpkin shaped cake.

Cut out triangle eyes and nose and a jagged mouth into the chocolate you prepared earlier and use the butter icing to stick them on to the pumpkin cake face.

Use the left over fondant to create a star shaped lid and the rough up the chocolate cone with a sharp knife to use as the stalk.

There you go, Pumpkin Shaped Cake, ready to display on your halloween themed table!

Equipment that helped us decorate our Pumpkin Shaped Cake.

We spent a whole day creating this Terry's Chocolate Orange Pumpkin Cake, of course, it was worth it, so enjoyable we are already thinking up ideas for the next cake!

Check out the inside of the cake! 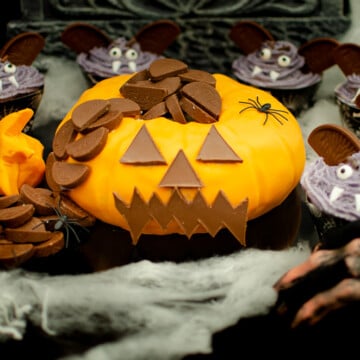 Luke and Kay - Flawless Food
Halloween is near and there is no better way to celebrate than making this Terry's chocolate orange pumpkin cake for your Halloween party. We show you how to make a simple chocolate sponge in a doughnut mould which is perfect for concealing the chocolate orange inside then how to decorate it into a pumpkin shaped cake. Decorated with orange icing, chocolate shaped for eyes, mouth and stalk and finally a fountain of terry chocolate mini's coming out the top of the pumpkin.The great spooky centrepiece for your Halloween Party.
5 from 12 votes
Rate this Recipe
Print Recipe Pin Recipe SaveSaved!
Prep Time 1 hr 20 mins
Cook Time 25 mins
Cooling time 30 mins
Total Time 2 hrs 15 mins
Course Dessert
Cuisine British
Servings 10 people
Calories 1244 kcal

Decorating cake into a pumpkin

Decorating cake into a pumpkin

This Halloween Pumpkin shaped cake post was originally created on 17/10/2019 and updated on 23/10/2021 with a single step by step recipe card with pictures.

The whole process of making this Pumpkin Shaped Cake was fun, furthermore, you must agree the end result is fantastic!

All our kids loved this cake; it put a big smile on their faces.