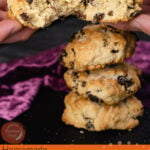 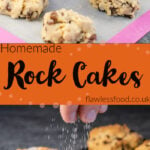 A favourite British classic recipe, these old fashioned rock cakes use simple ingredients and are so easy to make.

A small single served cake so named after their similar appearance to a rock, but don't let that put you off. Despite their appearance, these simple rock cakes are wonderfully crumbly and sweet!

How to make rock cakes?

You can't go wrong making these easy English rock cakes, even the kids can help out. Check out the recipe slideshow below.

Continue to read for all the pictures, tips and tricks showing you how to make rock cakes at home, or use the below link to jump straight to the recipe card!

Rock cakes were very popular during World War 2, they use fewer rationed ingredients such as egg and sugar than other English cake recipes.

Enabling families to have a sweet treat during the wartime strict rationing. Sometimes oatmeal would be used instead of flour.

More recently, they have been featured in the Harry Potter books where Hagrid made them numerous times, but they were not enjoyed due to Hagrid's poor cooking skills they were too hard!

We make our rock cakes with plain flour, salt and baking powder to give a little rise to them.

You can substitute the mixed spices with a mix of your own favourite spices instead.

You can use a bag of mixed dried fruit instead of sultanas. Or any dried fruit you prefer, such as apricots, cranberries, apples or dates.

You could also switch the dried fruit for chocolate to make chocolate rock buns if you prefer?

The rock cake mixture should have a thick and sticky texture. The mixture will make 9 large cakes.

Remember these do not need to be smooth, neat and tidy.

In fact, I encourage you to rough them up a bit with a fork before baking to help achieve the rough rocky cracks. Perfect for sprinkling sugar into once cooked!

We like to cook our sultana rock cakes on a silicone sheet, but you can use parchment or greaseproof paper instead on top of a baking tray.

This will give you the crispy outside and soft crumble in the middle that rock cakes are known for.

Don't let those sultanas or dried fruit burn! I find about 18 minutes is just right!

Straight from the oven, it is normal for the rock cakes to be a bit soft to touch still. They firm up as they cool.

Keep them on the baking tray until they have cooled enough to touch. Then transfer to a wire rack so they don't get a soggy bottom!

Now before they cool too much, it's time to take these simple rock cakes to the next level with a sprinkle of sugar, which gets into all the grooves and cracks.

There you have it, the best rock cake recipe, you have to try it to believe it!

Inside the crispy sugary shell of rock cakes is a marvellous crumbly texture with an even scattering of your chosen dried fruit.

Can also be served in a similar way to British scones, with clotted cream and jam.

Difference between scones and rock cakes?

British scones and English rock cakes have similar ingredients, but the scone mix has a dough-like texture that is shaped with your hands and cut with cutters to be smooth.

Rock cake mixture on the other hand has a sticky cake texture, which isn't handled or shaped helping to create the desirable rough and crispy cracks on the outside,

They have a lovely soft sweet crumbly texture which is washed down perfectly with a cup of tea.

The kids love to help make these cakes, and they are a great addition to their lunch box or for a family picnic. 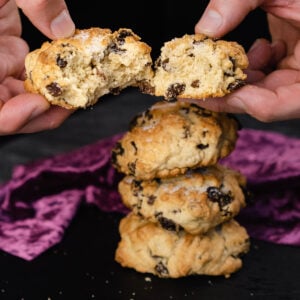 If you love this easy rock cake recipe and want more sweet easy recipes suitable to make with children, try our thumbprint cookies, oat flapjacks or the kids will love this no-bake edible cookie dough recipe.

Or stick with the sultana theme and make our large sultana cake similar but even more impressive!

Please let us know how you get on, and remember to share this recipe with others to bring these fantastic old fashioned rock cakes back into fashion again!

How to make rock cakes - old fashioned British recipe using simple ingredients. Easy and quick and the kids can help too!